You Must Have Your Placenta Analyzed by a Professional

The protocol was written with the help of worldwide known pathologist Dr. Kurt Benirshke of San Diego, California and  Founding Member of our Medical Advisory Board who has sadly since passed away.  Countless times we speak to families who try to gain more knowledge about their pregnancy only to learn that their placenta was thrown away.

This is not acceptable because all of the answers to ‘why’ are being disposed of as well. In addition, crucial factual information about the syndrome to help further research is also being discarded. Twin to twin transfusion syndrome is the most devastating problem facing multiples today. More accountability needs to take place to fight this disease and gathering the medical data is crucial.

Dr. Benirshke has outlined for pathologists the steps needed to be taken to correctly analyze a monochorionic placenta for the anastomoses that make the syndrome, the placental share to each baby, and other important data. We strongly recommend you to take this protocol directly to the placental pathologist at your hospital prior to the birth of your babies. Tell the pathologist that the placenta will be coming to the department in your name and that this test needs to be done to complete the registry and research for TTTS.

This information will also immensely help you to get more information about the ‘why’ TTTS happened. Don’t let the hospital just throw your placenta in the trash.  Don’t let the doctors tell you that pathology will study the placenta, they don’t know what to look for and most are not trained to identify TTTS.

They may get the placenta and they may be able to tell you the placental share, but beyond that will not happen unless you give them these instructions. We work with pathology departments frequently.

If there is ever a placental pathologist who feels the are not able to successfully complete an analysis of your placenta, direct them to this protocol. We understand how tremendously busy you are, but taking this one step to ensure the correct analysis of the placenta after birth will not only further much needed research, but will later give you much more peace of mind, no matter what the results say.

The following show the steps through pictures to correctly analyze a monochorionic placenta to confirm twin to twin transfusion syndrome. Below are key points to beginning the analysis:

When analyzing a placenta for twin to twin transfusion syndrome, the placenta should be refrigerated before examination, never frozen or fixed. Ideally one has:

The report should include:

Histology is the preparation of sections and examination under the microscope. Generally it is not needed for the interpretation of twin to twin transfusion syndrome placentas, but it is a good idea anyway.

The twins from the pictured placenta did survive. The donor was 925 g and recipient 1400g at 26 weeks. The baby girl with the more normal cord insertion was the recipient and first born, hence “A”; the one with velamentous cord thus became “B”.

There were some thrombi because the vessels running in the membranes (the “velamentous” vessels) are more prone to being injured, as they do not have the “protection” from Wharton’s jelly in the cord or the softer placental tissue on the fetal surface of the placenta.

It is difficult to examine the placenta of the transfusion syndrome for many reasons. In the first place, it is often disrupted and this makes injection study difficult. Moreover, these placentas often are from premature deliveries with placentas that are normally more delicate. Most important is that the examiner is familiar with the distribution of blood vessels in the normal placenta so that he/she can assess the sometimes very hard-to-see anastomoses that are the basis for the transfusion syndrome. Thus he/she should become familiarized by examining normal singleton placentas beforehand.

The transfusion syndrome happens essentially ONLY in monochorionic twin placentas. They may be monoamnionic (MoMo) or diamnionic (DiMo). One of the first requirements is that this status is assured. Thus, section of the “dividing membranes: of DiMo placentas must be made for the record.

At delivery, the umbilical cords of twins (A,B) need to be labeled with one or two clamps and this needs to be recorded and compared with their birth weights. Next, the lengths of the cords are measured (all of it) and recorded. Next, the insertion site of the cords must be documented (central, eccentric, marginal, velamentous).

The number of blood vessels in e cord needs to be recorded, then the cords should be detached from the placental mass. The “dividing membranes”, if present, needs to be sampled for histology. The peripheral membranes should then be trimmed and then the placenta is weighed and measured.

Then the maternal surface should be inspected for 1) completeness and/or disruption (it helps to know for the later purpose of injection), and 2? Color. It is especially relevant to note if both fetuses’ halves have the same darkness/lightness because this reflects the amount of fetal hemoglobin (thus, this is an indication of anemia and/or plethora).

Next is the fetal surface, the most critical part. The examiner should assess roughly what portion of placental mass is perfused by each twin. Is it 50:50 or is it 80:20, etc. This can be estimated by identifying the “placental vascular equator”. When one pursues, visually, the distribution of blood vessels as they emanate from the insertion of the cords to the periphery the “equator” becomes obvious.

At their ends, the fetal blood vessels dip into the villous tissue where they then perfuse a fetal cotyledon. Arteries normally cross over the veins and are thus easily identified (especially in their large calibers near the cords).

In the normal placenta, an artery leads to such a peripheral cotyledon, dips down, perfuses the cotyledon, and a corresponding vein brings the blood back from this cotyledon to the same fetus. One needs to identify BOTH these vessels and assure oneself that they come and go to/from the same umbilical cord.

The commonest communication between two monochorionic twins is a single artery-to-artery (A-A) connection on the surface of the placenta; these do NOT dip into villous tissue but are major shunts between the twins and blood can shift back and forth from one twin to the other, depending on blood pressure, heart rate, etc.

A vein-to-vein direct anastomosis is uncommon. The A-A anastomosis is of variable size, often it is quite large. But these communications may also be so small that they are hard to detect. It often helps to push blood gently back and forth in the surface vessels and thus make visible small anastomoses, but at times it requires injection.

The most important communication that is the major responsible agent for the development of TTTS is one where at lest one cotyledon is shared. That is to say, an artery comes from one twin (the donor), dips into a cotyledon, which is then drained by a vein into the other fetus (the recipient), who gets to be larger and plethoric.

VERY careful inspection of the fetal surface can actually identify these “common villous districts” (the shared cotyledons). At times though it requires injection. What’s worse, such shared cotyledons may be multiple, of different size, and they may have different blood flow directions. Thus, I always draw a picture of the surface blood vessels and/or photograph them. When I am uncertain or want to demonstrate the communications, then I inject them with milk.

It is foolhardy to try to inject the entire placenta as it is most commonly disrupted somewhere and this defect allows fluid to drain and thus prevents cotyledonary filling. I use milk because it is readily available, can be easily seen when the vessels and villi are filled, and it does not destroy the tissue for later histologic study. I use a completely filled 20 ml syringe with an 18 gauge needle.

Then I identify the potential major A-A region or shared cotyledon, so identified from inspection alone, choose it and try to inject this cotyledon only. The nearest feeding (or draining) vessels of adequate size is chosen for injection. One must be careful to insert the needle almost horizontally to the placental surface so as to prevent it from being double punctured.

I shove the needle in the chosen vessel for some distance, occlude the vessel around the needle with my fingers and then slowly inject as much milk as is needed to fill the entire cotyledon, until the blood/milk mixture emanates from the other vessel that leads to this shared cotyledon. (If later one inspects that maternal surface or, later still, sections this region, one finds this one cotyledon to be white, as all the blood has been replaced by milk). I record the findings carefully, best by drawings.

It is these vessels (actually only one of them) that needs laser occlusion in the TTTS therapy.
A problem arises when one twin has died prior to the twin delivery. When the death has been recent, the anastomoses may still be visible or even injectable. But, when fetal demise has occurred a long time prior to delivery, then injection is fruitless and only very diligent inspection may identify the possible offending blood vessel connections.

This may be true even when it is a large blood vessel through which one twin may have bled into the dead twin; they can be most difficult to identify.

Routine sections can be made, but they rarely add to unraveling the syndrome. True, the donor twin’s villi usually are much smaller and those of the recipient are larger and congested; rarely on may find a thrombus, but these findings are of minor consequence; Perhaps the most useful histology comes from a study of the amnionic surface, as the “stuck” twin (donor) often has amnion nodosum, not present in the recipient. 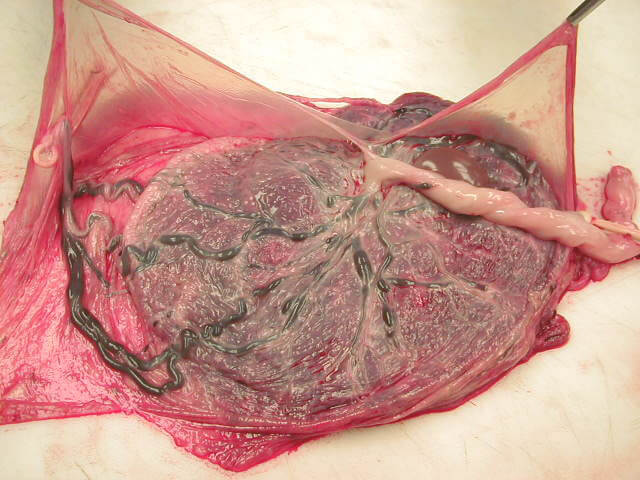 1. This is a picture of a monochoionic diamnionic placenta with twin to twin transfusion syndrome. There is velamentous insertion of the cord on the left side. This was the smaller donor twin (B). When one looks carefully at the blood vessels that came from the insertion of the cord and go to the placenta, one will see some white streaks in the veins – they are thrombi. Birth weights were recipient baby (A) 1400g and donor baby (B) 925g at 29 weeks. Both did well. 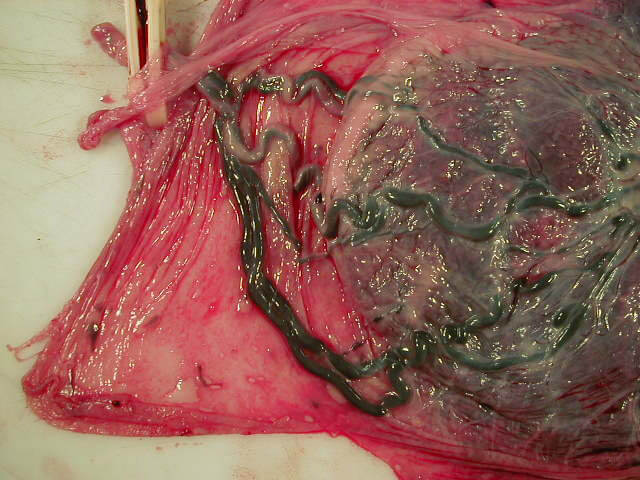 2. This shows a higher magnification of the velamentous insertion and the thrombi. 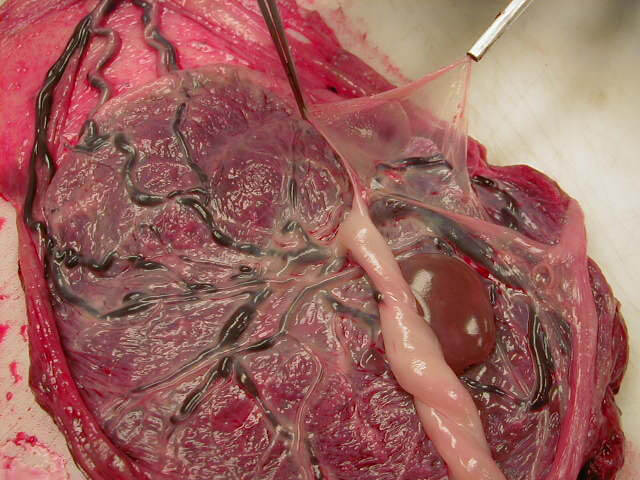 3. The “dividing membrane” is being held up to show how translucent a diamnionic-monochorionic membrane partition is. Also, under the central cord insertion of Twin A,
is a large cyst that has nothing to do with this case. 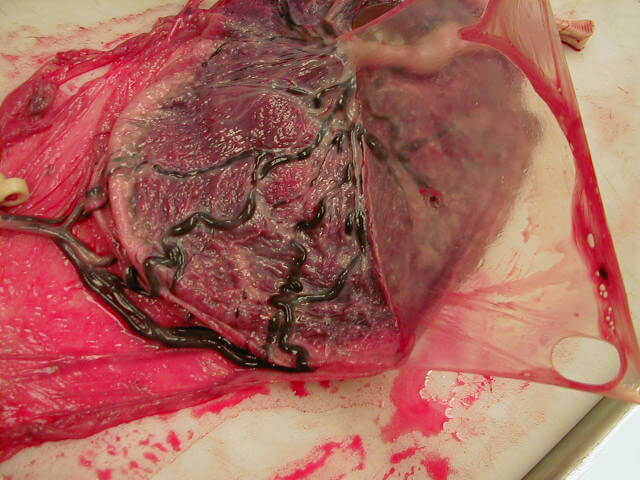 4. Next, the amnion on the surface of the placenta needs to be peeled off to make the
vessels more easily identified, and to obtain better quality placental photographs. 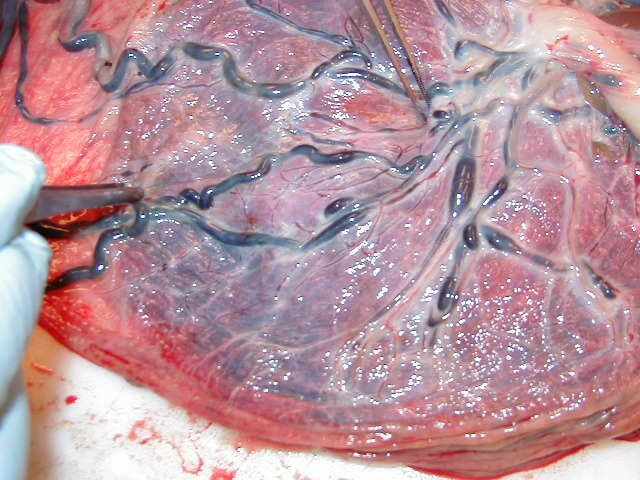 5. This picture shows the placental surface. There is an A-V (artery-to-vein) district
on top, in the circle. The A-A (artery-to-artery) anastomosis that we are going to inject
next is labeled A-A. 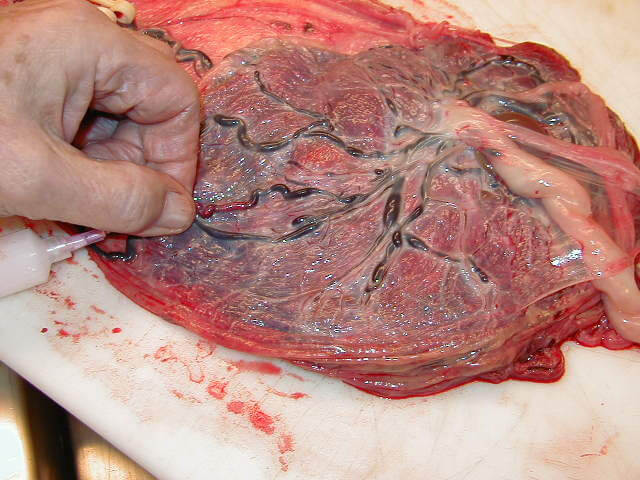 6. The needle is inserted into the artery. The needle must be held tightly in the
vessel so as not to spill the injected milk. A small portion of the artery is already filled. 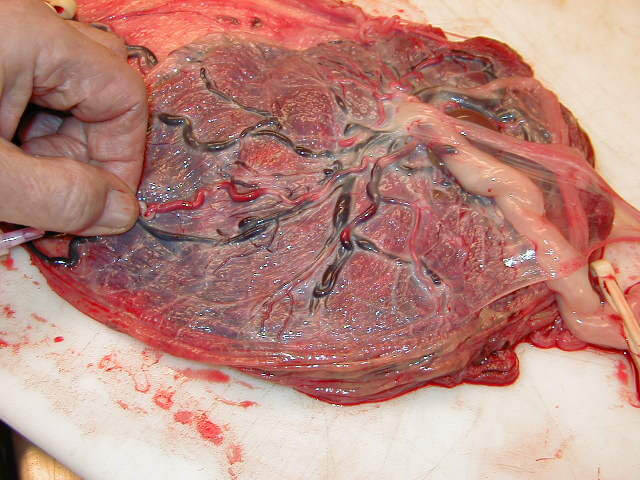 7. More has been injected and the milk can be seen to pass over to the other
twin’s side (at arrow). 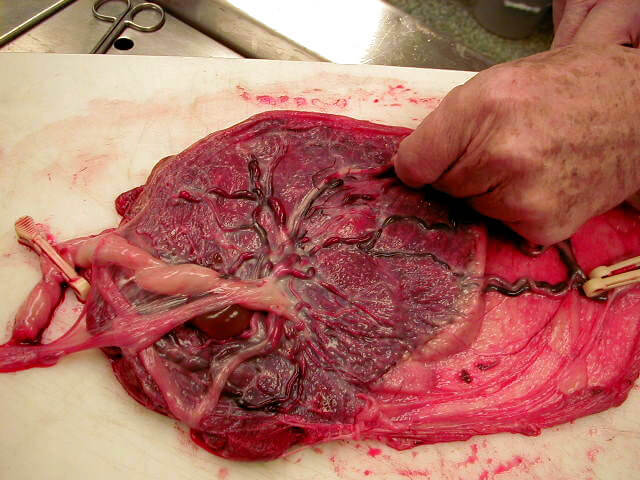 8. This shows injecting another vascular district. This one turned out to be a V-V
(vein-to-vein) anastomosis, quite uncommon.

9. Finally, roll the dividing membranes to get some good histology after formalin fixation.