TAPS (twin anemia polycythemia sequence) is a chronic (slow over time) form of TTTS. It is defined as where red blood cells from one baby (the donor) pass through very small shared blood vessels (less than 1mm in size and usually always artery to vein connections on the edge of the placenta), also called anastomoses, in a single monochorionic placenta, to the other baby (the recipient).

Unlike classic TTTS where one baby gets too much and too little “volume” of blood (causing more than normal and less than normal amounts of amniotic fluid), TAPS is an intertwin exchange through the placenta of only the red blood cells so the amniotic fluid levels stay normal and there is no physical changes in the mother, but TAPS can be life-threatening for the babies without anyone ever knowing.  We call TAPS the silent killer using #TAPSisSilent.

You must get MCA dopplers in the brains of the babies to diagnose or rule out TAPS starting weekly at 14 weeks gestation through delivery of your babies.  You need to also look for secondary signs of on ultrasound.  A TAPS donor baby may show a lighter color and echogenic or thicker placental share and/or an enlarged heart (cardiomegaly). For a TAPS recipient baby you might see a starry sky liver (appearing to have white marks on it like stars).

Including looking for TAPS, answer The TTTS Foundation’s 15 Most Important Questions at each ultrasound. To be surrounded in help and support, please join our online support group today and call us at 800-815-9211 or use the contact form so we can help you immediately! 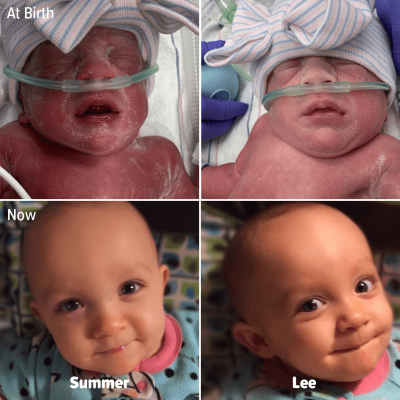 OUR LETTER TO PARENTS

How is TAPS Diagnosed During Pregnancy?

Twin anemia polycythemia sequence (TAPS) is a silent killer as the mother will not show any physical symptoms. Taps can happen before birth (antenatal) or after birth (postnatal). To diagnose (or rule out) TAPS, a high risk doctor called an MFM (maternal-fetal medicine) specialist will use a doppler to measure the peak systolic velocity (PSV), or the speed of blood flow, through the middle cerebral artery (MCA) of the brains of the babies (using a MCA-PSV Doppler).

The speed of the blood flow is measured by centimeters per second compared to the multiple of median (MOM) or the average speed for a baby at that particular gestation age.  You want to see the measurement close to 1 for each baby. The further away from 1 the babies are (in opposite directions), the more serious the condition. 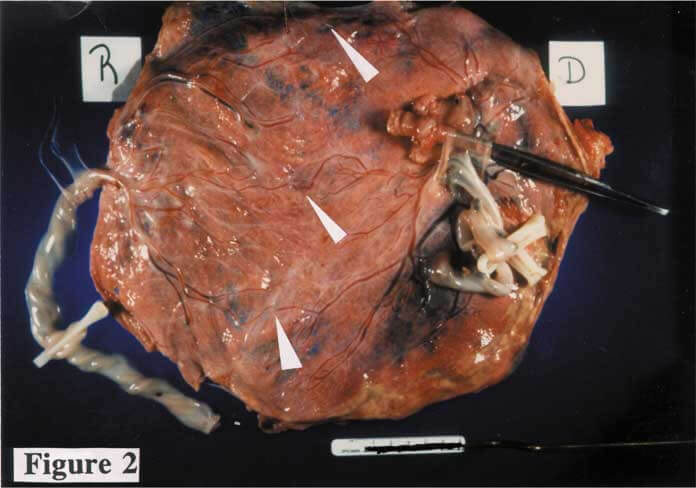 For an In-Depth Understanding of the Monochorionic Twin Placenta

To summarize, hemoglobin is the protein in red blood cells that transports oxygen and carbon dioxide and gives blood the color of red.  With TAPS, one baby has too little red blood cells, the donor.  The other baby, the recipient, has too many red blood cells.

It is crucial that a mother who learns she is pregnant have an ultrasound by 8 weeks gestation with an MFM specialist to determine if she is pregnant with twins or more.  Once determined to be multiples, the first question is, “Is there one placenta or two?”  If there is one placenta, and very rarely if there are two, you are at risk for TTTS including TAPS.

You must have weekly ultrasounds with an MFM starting no later than 14 weeks through the delivery of your babies and you must have MCA doppler at each ultrasound to diagnose and monitor or rule out TAPS.  This is the only way to save the lives of your babies who could be suffering from TAPS and you don’t know it.

The TAPS donor baby is often the TTTS recipient baby if TAPS develops after a failed laser surgery on the placenta, but not always, and usually will have more placental share.  The TAPS donor baby will have a high PSV (peak systolic velocity) in the MCA (middle cerebral artery) which means the baby is anemic with low amounts of red blood cells and the speed of the blood through the artery is fast because the blood is very thin like pink colored water.

The TAPS donor baby may also have its share of the placenta to be thicker, hydropic and paler in appearance than the side of the placenta for the recipient baby.  The donor baby can develop an enlarged heart due to the anemia (cardiomegaly) which can lead to hydrops (edema, or water under the skin) in the later stages of TAPS due to severe anemia and beginning heart failure.

The TAPS Recipient Baby has an overload of red blood cells, which causes the blood to become very thick like ketchup and the flow of the speed is much lower and sluggish.  The baby will have a low PSV (peak systolic velocity) in the MCA (middle cerebral artery). The recipient baby can develop blood clots (thrombosis) which can be fatal . Both babies can have cardiovascular problems as the disease progresses.

The recipient baby is often the classic TTTS donor baby if TAPS happens after a failed laser surgery.  The TAPS recipient baby may also then have less placental share than the other baby with its side of the placenta very dark red and normal thickness. There can be a starry pattern on the liver of the TAPS recipient baby like white stars in the sky called starry liver 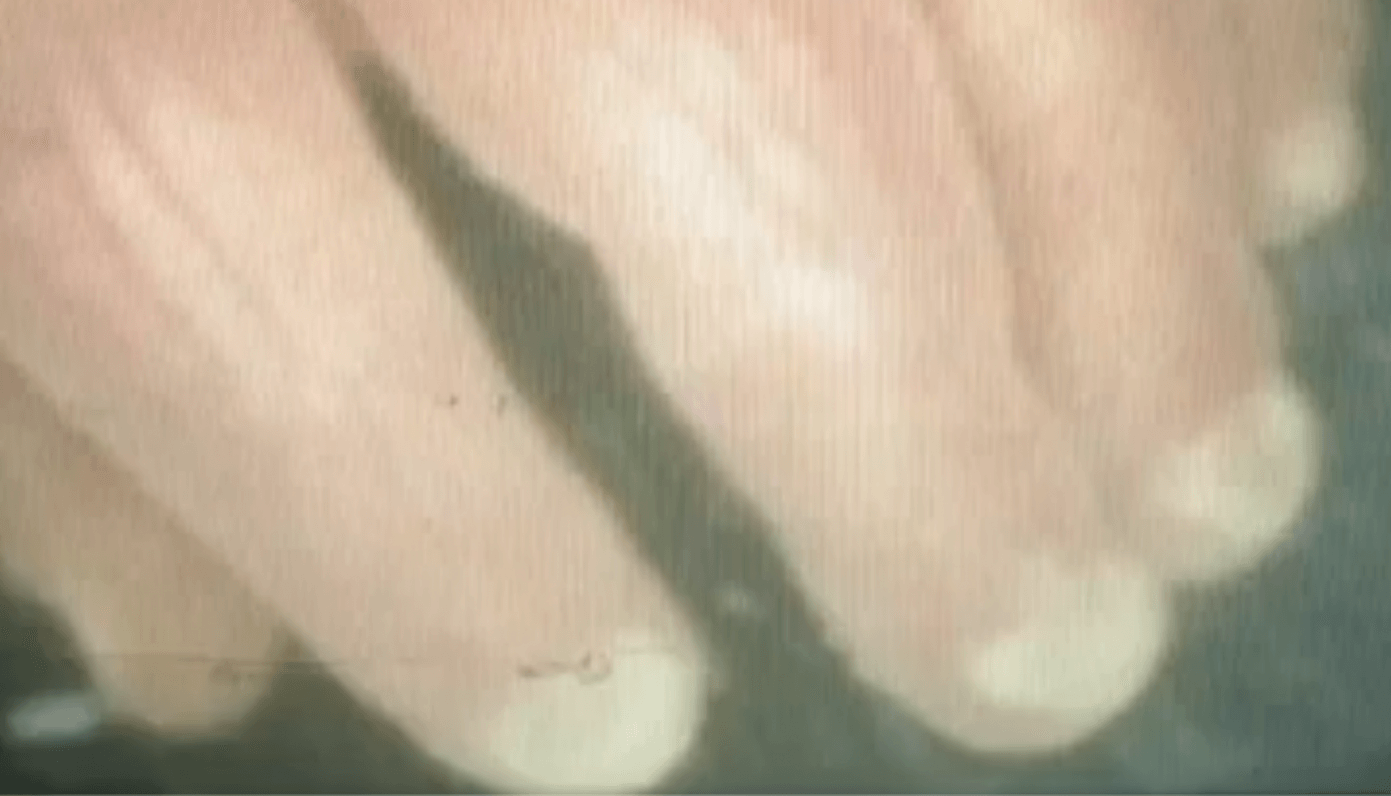 Fetoscopic demonstration of twin anemia polycythemia sequence (TAPS).  Note the discordance in skin color between the reddish polycythemic twin in the near field and the pale anemic twin.  Courtesy of Ramen Chmait, Medical Advisory Board Member of The TTTS Foundation.

TAPS can happen spontaneously (out of the blue all by itself) or after laser surgery called Post Laser TAPS (which is more common) when very small shared vessels (1mm in size usually at the edge of the placenta) are missed by the laser doctor.  TAPS vessels are usually always artery to vein vessels.

A mom pregnant with monochorionic twins must get weekly ultrasounds from 14 weeks through delivery to look for TAPS as well as TTTS, SIUGR and rule out TRAP when everything is perfect in the pregnancy.  In fact, a doctor may tell you the babies look great on ultrasound, which is wonderful to rule out TTTS, SIUGR and TRAP, but did the doctor do an MCA Doppler?  If not, then things might not be so perfect.

TAPS should never be a surprise as it progresses very slowly.  It can be diagnosed with an MCA doppler and if the numbers show TAPS, then monitors with an MCA doppler more frequently, 2-3 times a week or more depending on the severity. There is zero excuse by any doctor not to do an MCA Doppler  and you must demand this or you need to switch doctors.  The TTTS Foundation can help you get the care you need.

The Stages of TAPS: During Pregnancy

Below are the classic stages to TAPS called the Leiden Staging System, but also updated with the most recent proposed protocol.  Stages were updated because some babies were being born with TAPS that were missed under the current criteria.  We think it’s important to list both because there is not a clear consensus amongst specialists.  For example, if one baby had 1.3 MOM and the other .8 MOM, there is a difference of 5, but the measurement has to be over 1.5 MOM to be anemic. 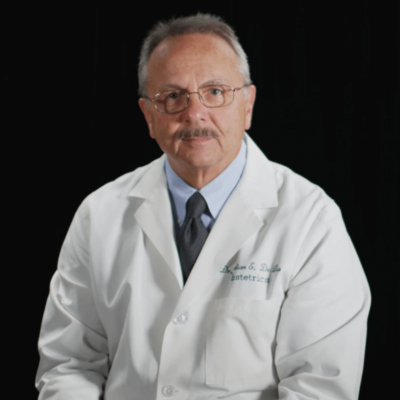 How is TAPS Diagnosed After Delivery?

Three Criteria for Diagnosis of TAPS and Ruling out Acute TTTS

Babies born with untreated twin anemia polycythemia sequence will show extreme differences in their coloring with the TAPS donor baby extremely white and pale from the severe anemia and the TAPS recipient baby extremely red to purple from the extreme overload of red blood cells.

The babies may need a blood transfusion for the anemic twin and partial transfusion to dilute the blood of the polycythemia twin.  Since Acute TTTS can also take place at delivery with similar coloring, TAPS must be diagnosed by combination of placental analysis, hemoglobin levels of both twins and reticulocyte counts of each baby.

After birth, three criteria must be shown including:  placental analysis of <1mm blood vessels, a difference of hemoglobin levels starting at >8 and difference of reticulocyte levels >1.7.

A placental pathologist will inject color into the monochorionic placenta and will be able to identify the very small blood vessels <1cm in size to confirm TAPS.  With TTTS, the connecting blood vessels are much larger in size (dental floss compared to yarn).  There will also be a color difference on the maternal side of the placenta (pale and dark) with TAPS that is not there with acute TTTS.

It's Important to Have Your Placenta Analyzed

With TAPS, there is a large hemoglobin difference between the babies.  Below are the Leiden Stages for hemoglobin levels for TAPS babies after birth after subtracting their individual levels.

With TAPS, the anemic donor baby’s reticulocyte levels would be increased because TAPS is a slow, chronic disease with chronic blood loss and there would be time for a significant increase of the donor’s reticulocyte count compared to the other recipient baby.

The Stages of TAPS: After Delivery

What are the Treatment for TAPS?

If TAPS is suspected, your MFM should monitor and watch closely for a clear change in the MCA readings.  If TAPS is spontaneously diagnosed, no prior laser surgery, laser surgery will be offered typically in stages 3-4 when there are signs of a compromised cardiovascular system and abnormal blood flow patterns in the umbilical cords.  Delivery is always an option if symptoms are worsening and laser surgery is not available.

If TAPS is diagnosed after an incomplete laser surgery for TTTS, laser surgery can be repeated so as to analyze the placenta a second time to identify and to cauterize any small vessels <1mm that were missed during a first laser procedure.

To help the donors anemia, this type of blood transfusion may be performed to allow a slow absorption of red blood cells into the babies’ shared circulations.  This approach protects the recipient baby from sudden blood loss.  In the NICU, they will stabilize the babies

After Birth of the Babies

In the NICU, they will stabilize the babies through a partial exchange transfusion for the recipient to decrease the thickness of the blood, and a blood transfusion for the anemic donor baby.  It is crucial to determine TAPS over TTTS before beginning treatment in the NICU.

In summary, you must have MCA dopplers on the brain of the babies done weekly while you also are looking for TTTS starting by 14 weeks. The doctor might also see the TAPS donors’ side of the placenta thicker and lighter in color than the other baby’s side. They might also see a starry liver in the recipient of white dots on the liver like multiple stars in the skm 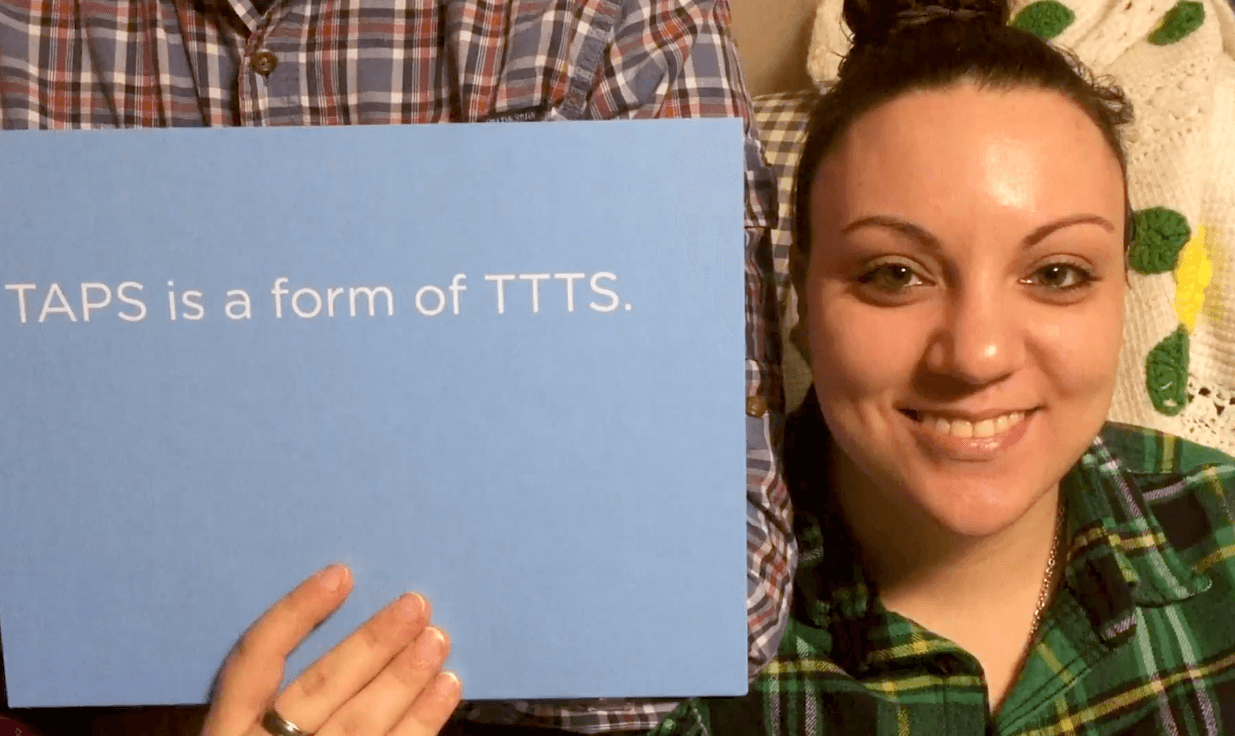 Brandon and Laura’s babies Summer and Lee had TTTS laser surgery only to find out the babies were then diagnosed with TAPS.  Summer and Lee are the babies featured at the top of this section.  To see them improve from being red to purple and white to just beautiful, healthy little girls is an inspiration for everyone to keep fighting and contact The TTTS Foundation for help.

Twin to Twin Transfusion Syndrome is a powerful disease, but it's not stronger than a mother's love.